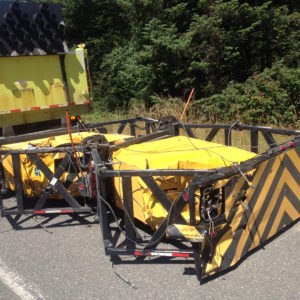 Freeways like Interstate 90 are busy places.  This major east-west highway carries tens of thousands of vehicles each day.  This heavy load takes its toll on the highway. Unfortunately, work on the freeway can also be dangerous, especially when drivers ignore warning signs.

Highway Work is High-Risk and Dangerous

The Washington Department of Transportation (DOT) has the responsibility of keeping I-90, one of the busiest freeways in the state in good shape, and the men and women who work on it have dangerous jobs.  The sheer volume of traffic, heavy truck traffic, and a 70 mph speed limit which many drivers exceed, all create a high-risk work environment.

Our client was a 72-year-old Ellensburg man who went to work for DOT after a career in trucking. He was at work with a “button crew” replacing the reflectors between the lanes on westbound I-90 near North Bend.

DOT has a safety plan for every highway maintenance job.  On this job, DOT’s safety plan included a large over-the-freeway electronic sign about 10 miles east of its crew telling motorists that the right lane was closed ahead and to move left.  Closer to where the crew was working, the safety plan placed two DOT vehicles on the shoulder with large electronic signs mounted on them with arrows flashing, telling drivers to move left.

Our client’s job was to operate a dump truck with an “attenuator” on the back of it.  The attenuator was the last line of defense for the crew replacing the reflectors.  An attenuator is a trailer with shock-absorbing material designed to protect the lives of the workers on the road ahead of it and prevent damage to the equipment being operated.

On July 18, 2017, it was our client’s job to protect his co-workers by driving the dump truck with an attenuator.  He had his flashing lights on, a bright yellow and black striped sign on the back of the attenuator trailer, and an electronic sign mounted on top of his dump truck with a flashing arrow pointing left.

Use Extreme Caution and Slow Down Near Highway Work Zones

An 18-wheeler semi-truck pulling a trailer was westbound approaching in the outside lane.  The truck driver claimed never to have seen the electronic sign over her lane, the two DOT vehicles with directional arrows to the left, nor the flashing lights and directional sign on the dump truck.

She saw our client’s truck at the last second and swerved abruptly to the left, but the rear of her trailer slammed into the attenuator, knocking it and our client’s dump truck forward, and throwing our client to his left into the driver’s door.  Our client sustained an aggravation of degenerative age-related changes in his left hip which had never caused him any problems before the collision.  He eventually underwent surgery for a total hip replacement.  His past medical expenses totaled $64,750.  He was unable to return to work driving for DOT.

The driver for the Canadian trucking company claimed not only that she saw no warning signs, but that our driver pulled out from the shoulder in front of her.  All the witnesses saw it otherwise.  The Washington State Patrol cited the semi-driver.  When her insurance company denied liability, we filed suit.

After depositions were taken of the semi driver, our client, his wife, and his family, the insurance company suggested mediation shortly before trial.  The case was settled at mediation for $500,000.  As part of the settlement, the state Department of Labor & Industries was repaid for the medical expenses and wage loss it had paid out.

The next time you see a DOT road crew, be thankful for the workers who risk their lives and health every day to provide you with safe highways.  If you or a loved one is injured as a result of a collision with a semi, call Abeyta Nelson Injury Law.  We have handled a lot of truck cases, know the regulations for big rigs, and are not afraid to go to court to get you what you deserve.  As always, there’s never any attorney fee unless you win your case.