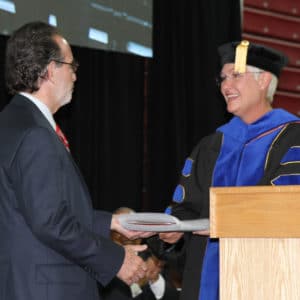 Born and raised in Yakima, Terry attended YVC from 1969-1971 where he had some of the best teachers of his education. He benefited from outstanding teachers like Delma Tayer, Inga Wiehl, and Mary Lou Schmidt in English; Gordon Howard, Jim Newbill, and Bill Scofield in history; Paul Anderson in political science; Robert McCutcheon in philosophy; Millie Stenehjem in speech; and the late Herb Blisard in journalism. He graduated at the top of his class with a 3.98 GPA and as a member of Phi Theta Kappa, the international honor society of two-year colleges.

Terry worked his way through college and law school as a reporter with the Yakima Herald-Republic, Walla Walla Union-Bulletin, and the Seattle Post-Intelligencer. While working for the P-I, he broke the story on the first victim of serial murderer Ted Bundy.  After law school, Terry practiced for two years with a law firm in the Seattle area, where he was drawn to litigation.

Terry moved back to his hometown in 1978 to practice law and raise a family. He practiced in a firm for two years, honing his ability as a trial lawyer, before going into solo practice in 1981.  He hired Rod Nelson in 1982, and the two attorneys recently celebrated 36 years of practice together. Terry has limited his practice to personal injury cases since 1985.

Although practicing in one of the most conservative areas in the state, Terry has earned a reputation as one of best personal injury lawyers in Washington. In 2018, Terry was again honored as a Super Lawyer, and has been chosen for this honor every year since 1999. He has been named to The Best Lawyers in America every year since 2009, is the only lawyer in Central Washington chosen for the Damage Attorney Round Table, has been selected for the American Board of Trial Advocates and Million Dollar Advocates, is recognized by LawDragon Leading Plaintiff Lawyers in America, has served in many leadership positions for the Washington State Association for Justice, and is past president of the Yakima County Bar Association.

Terry has achieved the highest personal injury settlement, arbitration award, and jury verdict for a neck injury case in the history of Yakima County, and the highest settlements in Kittitas, Grant, and Klickitat counties.