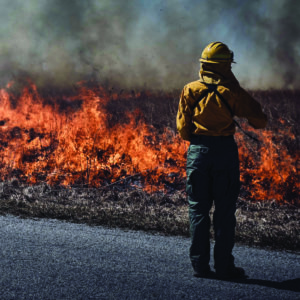 Worse yet, the fire season starts as early as April and does not end until mid-October.  As of June 2021, there have already been several fires along the I-82 corridor.  Poor forest management practices, as well as climate change, are contributing to this increase.

In response to the increase of catastrophic fires in Washington State, the Washington State Legislature appropriated $125 million for wildfire prevention and suppression biannually beginning in 2021. This will fund 100 additional firefighters, as well as update the aircraft fleet designated for fire suppression.

Although the additional funding will hopefully help bring down the number of fires and their severity, it will not solve the problem any time in the near future.  According to Commissioner Franz, “It has taken 50 to 100 years to get into this mess – we’re not going to get out of it right away,” she said.

So, fire prevention is critical.  Although some fires are caused by lightning strikes, the majority of fires are man-made. Everyone needs to do his or her part in preventing manmade fires. Many fires are caused by downed power lines.  Utility companies, responding to claims against them, have started making an extra effort to remove vegetation and trees near power lines. Trees falling against power lines is a common cause of wildfires. These same companies have instituted programs to shut off power during high fire danger periods.

Other fires are caused by individuals not tending campfires or allowing things like tow chains to drag on pavement. The public needs to be more vigilant, especially on red-flag warning days, when conditions are hot, dry, and windy.

Abeyta Nelson encourages everyone to do their part in preventing these devastating fires.  And don’t forget to thank the firefighters who put their lives on the line to fight them.

Abeyta Nelson has represented more than 300 fire victims in the past decade and is currently representing 350 additional clients. Our firm has recovered over $25 million to date for these victims. These dollars represent compensation for timber loss, damage to agricultural lands, loss of structures, loss of property, and the emotional distress that comes from fleeing from a fire and the losses it inflicts.

If you have been damaged by a wildfire, call us.  We will evaluate your claim at no cost to you, and there’s no attorney fee unless we win your case.