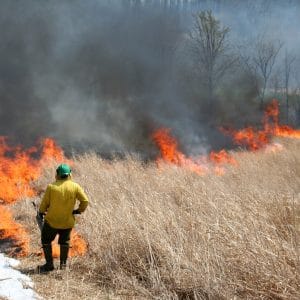 A wildland fire fighter overseeing a controlled burn in progress.

It’s summer in Central Washington, and wildfire season has begun.  In 2016, nearly 500,000 acres burned as a result of wildland fires in Washington and Oregon.  The cost of wildfire suppression last year totaled over $1.6 million, but the damage to forests, wildlands, fencing, and structures far exceeded this amount.

Though there were a few fires on the Olympic Peninsula, most Washington wildfires in 2016 occurred in Central and Eastern Washington, including the Range 12 fire, which burned 176,000 acres, near Moxee, Washington.  This was the largest acre wildfire in the Northwest last year, and was human-caused. Though more fires were caused by lightning strikes, 436,000 of the 500,000 total acres burned happened as a result of human-caused fires.

The wet spring in the Northwest in 2017 has delayed the onset of wildfire season.  However, our wet spring will, paradoxically, increase the risk of wildfires this summer and fall because of the increased vegetation growth from excessive winter precipitation.

A Yakima Herald-Republic article on two recent local wildfires – one near Tampico, Washington, which moved quickly and threatened homes, and another near Ellensburg, Washington which forced some residents to evacuate their homes – illustrates how quickly fires can ignite and spread in dry, hot and windy conditions.  The fourth of July holiday poses additional risks and warnings for residents and firefighters alike.
The good news is that most human-caused wildland fires are preventable.  The risk of fires can be reduced by strictly obeying burn bans, respecting “red flag” warning days, ensuring vehicles are properly equipped and maintained, being careful with campfires and outdoor barbeques and keeping vegetation and trees trimmed and thinned.  Firewise USA, an organization devoted to helping residents reduce their wildland fire risk, offers a number of safety tips for keeping families safe this summer.
Contractors doing hazardous activities like welding and metal cutting must take appropriate precautions to avoid the spread of hot particles, which cause many fires.  Running any equipment, even farm equipment, on red flag warning days is a risk.  Take precautions to make certain that if a fire should start, it can be suppressed very quickly.  If not suppressed immediately, these fires quickly become unmanageable, even for well-equipped fire fighting crews, especially when temperatures are high, moisture content of combustible materials is low, and the wind is blowing.
Homeowner’s insurance typically covers loss of structures and personal property, though some owners find themselves underinsured for many of their losses, particularly items of personal property with a sentimental value.  However, insurance rarely covers losses due to damage to woodlands and grasslands.  Making a claim against those responsible for starting the wildfire is usually the only means of compensation for these kinds of losses.
At Abeyta Nelson Injury Law, we’ve successfully represented more than 250 clients who suffered damages to their property caused by unnecessary and preventable wildfires.  Some of our clients lost literally everything they owned – their homes and all of their property.  Others have lost equipment or outbuildings, and still others have experienced damage to woodlands or grasslands that will take decades to recover.  If you’ve been damaged by a wildland fire and want to know your rights, contact us at Abeyta Nelson Injury Law.
-blog written by Rod Nelson, Senior Attorney, Abeyta Nelson Injury Law
Last : How to Handle a Parking Lot Car Accident Next : 5 Questions to Ask When Choosing a Personal Injury Attorney