An Overview of a Personal Injury Suit that Goes to Court 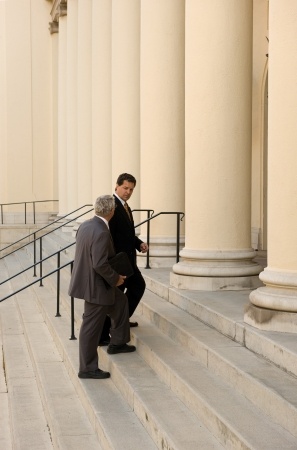 When a personal injury lawsuit goes to court, the road will be long, and often challenging. As a result, it is common for personal injury cases to be settled instead of going to court in order to avoid the ordeal. Additionally, all parties involved often find that settling can be more financially practical than going to court.

However, if the case does to court, there are several stages that the case will go through. First, there is the “pretrial stage” of preparing for court. In this stage, there will be a series of pretrial motions that the lawyer for each side will file. Pre- trial motions serve a variety of purposes, such as trying to have the other party’s case dismissed, or asking for permission to collect certain types of evidence. Additionally, the lawyers will be gathering evidence that is relevant for their cases, and also identifying witnesses who they want to testify at trial. Depositions, in which parties in the lawsuit, witnesses and experts, answer questions under oath are taken. Written questions, from the other side, called interrogatories, are answered.

Next, the attorneys and the judge will go through the process of selecting a jury to hear the case. This process is known as “voir dire.” Attorneys for both sides will want to dismiss any jurors who could be biased for or against the case. As an example, suppose that your personal injury is based on being hit by another driver. If a potential member of the jury had been sued for hitting another driver, and was still very upset about being sued, he could be biased against your case. As a result, your attorney would request that this individual not be on the jury because of this bias.

Once the jury is selected, the trial will begin. At this point, the attorneys for each side will give opening statements, and then present witnesses throughout the trial to prove their cases. Closing statements will then be given as well. This process could take anywhere from a day to several weeks or a month, depending on the complexity of the case being tried.

After the closing statements are made, the jury reaches a decision. The judge, however, always has the discretion to modify the jury’s decision. At the conclusion of the trial, the losing party has the option to appeal to a higher court if feeling that the decision reached did not uphold justice.

Victims of personal injury may find themselves intimidated at the prospect of filing a lawsuit and going to court. If you are not sure what the next steps should be for your case, feel free to call us at 509.575.1588, 800.927.2845, or email us at injurylaw@abeytanelson.com. Abeyta Nelson Injury Law is here to help.