Why I’m Proud to be a Lawyer | Rod Nelson 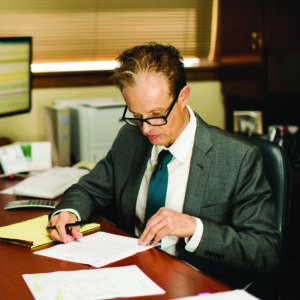 The legal profession has a long and proud history in the United States. Out of the 56 signers of the Declaration of Independence, 25 were lawyers. Out of the 55 men who attended the Constitutional Convention, 32 were lawyers. Two of the three men who wrote the Federalist Papers, commonly considered to contain some of the more important thoughts on the creation of our nation, were lawyers. Many of our nation’s presidents have been lawyers, including our second president, John Adams. Abraham Lincoln was an accomplished trial lawyer before guiding our nation through the Civil War. Franklin Delano Roosevelt, whose steady hand brought us through the Great Depression and World War II, was also a lawyer.

Lawyers have been at the forefront in the fight for civil rights and to end gender discrimination in our society. At the community level, many lawyers serve on nonprofit boards. Lawyers can be found on school boards, city and county councils, and in the state and federal legislature. All lawyers serve their community by helping our society follow the rule of law.

Lawyers also serve to keep corporate America from running roughshod over those of lesser means, by pursuing products liability actions and, where appropriate, class actions as a way of limiting corporate bad acts. It was a young lawyer who creatively used the equal time requirement for television advertising to prevent the tobacco industry from advertising its products on television. It was lawyers who pursued lawsuits against the tobacco industry for falsely advertising that its products were not harmful to health. It was also lawyers and their lawsuits–not legislators–that convinced the clothing industry to make children’s pajamas non-flammable.

Given the importance of lawyers to the stability of our society, it’s not surprising that the Shakespearean character “Dick the Butcher” in Henry VI, who was plotting with other revolutionaries to overthrow the government as a means to create anarchy, felt that the first step to creating chaos was to “kill all the lawyers.”

While the lawyers at Abeyta Nelson have not had the privilege of drafting a Constitution, we are aware of the great history and tradition of our chosen profession. We take pride in representing regular folks who have been injured or otherwise damaged by the wrongful acts of others. We take pride in doing the very best job we can to obtain compensation for them.

All of the lawyers at Abeyta Nelson also serve on local nonprofit and professional boards in our community.  These include the Yakima Valley Community Foundation, the Washington State Association for Justice, Catholic Charities of Central Washington, La Salle High School, Volunteer Attorney Services of Yakima, The Foundation for Washington Courts, Children’s Wishes and Dreams, and Coffee House Poets, as well as serving as a lector and eucharistic minister at St. Paul Cathedral.

If you have a question about your potential personal injury case, please contact us today.  We’re happy to answer any questions you may have.

Last : What to Do if You Were Uninsured at the Time of a Car Accident Next : Settling a Personal Injury Case