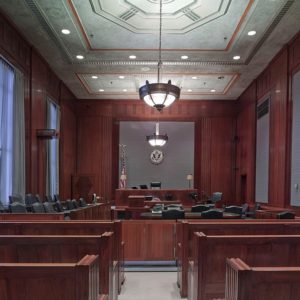 Many people believe that all injury claims end up in court, when in reality, the vast majority of personal injury cases settle before trial.

I am often asked: “Is my case going to end up in court?” This is typically one of the first questions I hear at an initial conference with someone who has been injured in a car crash.

There is a common misconception that all injury claims end up in court, and ultimately at trial. Many people are fearful of going to court, fearful of the unknown, fearful of the setting, and fearful that they may lose their case. All of these fears are understandable. But, most likely, your case will not end up going to trial.

According to the National Highway Traffic Safety Administration, over six million car crashes were reported in 2015. Almost 2.5 million injuries were reported as the result of car collisions. The U.S. Department of Justice estimates that 4% of people with personal injury claims will actually go to trial. To put it another way, 96% of all cases settle before trial.

The lawyers at Abeyta Nelson Injury Law work toward resolving your claim with a fair and reasonable outcome without filing a lawsuit and going to court. Our goal is to negotiate a settlement with the insurance company once a client has returned to his or her pre-collision condition, or the client’s treating medical providers feel they have done everything they can for the client. About 90% of the cases handled at Abeyta Nelson Injury Law settle without having to file a lawsuit.

There are two primary reasons that cases are not settled prior to filing a lawsuit:  the first is a disagreement over liability, or who is at fault for causing the collision, and the second is a disagreement about the reasonable value of the case. This often includes disagreements about whether an injury was due to the collision or due to some other reason.

Whether your claim settles before or after the filing of a lawsuit, the lawyers of Abeyta Nelson Injury Law are paid on a contingency basis. This means that you do not pay anything unless there is a recovery on your case. You are not billed by the hour, and you do not have to pay anything up front.

If you or a loved one has been injured in a car collision, call Abeyta Nelson Injury Law right away. There is never a charge to talk with us, and no fee unless we win your case. The sooner we are involved, the more help we can give you.

Last : What is “UIM” Coverage? Should it be a part of my Auto Insurance Policy? Next : Know the Rules of Biking | Bike Accident Injury Attorneys